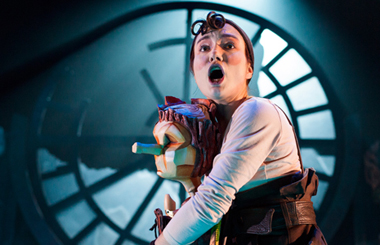 In Pictures: Montreal and Nashville Collaborate on New ‘Pinocchio’

Article published on July 18th on ArtsNash, by Rick Malin.

Tennessee Performing Arts Center Education is involved in a first-of-its-kind collaboration with a Montreal theater company to present an English-language version of Pinocchio.

This imaginative and energetic interaction with the 1883 Carlo Collodi story is written and directed by Hugo Bélanger, the artistic director of the internationally renowned Théâtre Tout à Trac.

Inspired and impressed by the work of TPAC Education during their Nashville run of Alice in Wonderland in 2011, Bélanger suggested the partnership that will bring the troupe’s latest work to English-speaking audiences. The play premieres at TPAC Nov. 4-8; that initial run is followed by a 45-performance American tour at major arts centers.

Bélanger and general manager Michel Tremblay are in Nashville, and a work group of Music City actors is providing feedback to the theater on its English-language presentation. The company was so enamored with students from the Tennessee School for the Blind during Alice that some of those students will be part of the event when the show opens in November.

On Tuesday at the Centennial Park Arts and Activity Center Bélanger and Tremblay met with Nashville actors Mary Tanner Bailey, David Compton, Keri Pisapia and Patrick Waller (along with facilitator Carolyn German) to play with the English-language script as part of the work’s development process. Here are some of the pictures taken by Rick Malkin there.